Gary Braver is the internationally bestselling and award-winning author of nine critically acclaimed mysteries and thrillers including Elixir, Gray Matter and Flashback, which is the only thriller to have won a prestigious Massachusetts Book Award. His latest is Choose Me written with Tess Gerritsen.

His novels have been translated into seventeen languages, and three have been optioned for movies, including Elixir by director Ridley Scott.  He is the only writer to have three books listed on the top-10 highest customer-rated thrillers on Amazon.com at the same time.

Under his own name, Gary Goshgarian, he is an award-winning professor of English at Northeastern University where he teaches courses in Modern Bestsellers, Science Fiction, Horror Fiction, and Fiction Writing.  He has taught fiction-writing workshops throughout the U. S. and Europe. He is also the author of five college writing textbooks and has written short stories, book reviews, and travel articles for The New York Times, The Boston Globe, The Christian Science Monitor and elsewhere.

He was born and raised in Hartford, CT and holds a BS degree in physics and an MA and PhD in English. Before settling into college teaching, he worked as a project physicist. An avid bicyclist, hiker, and scuba diver, he lives with his wife outside of Boston.

“How to Write a Successful Thriller” from Writer Magazine.

In Gary’s own words: 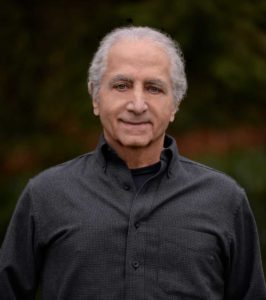 I was born and raised in Hartford, CT and educated in its public schools. I received a B.S. in physics from Worcester Polytechnic Institute, an M.A. in English from the University of Connecticut, and a Ph.D. in English from the University of Wisconsin.  Before settling in a teaching position at Northeastern University, I worked as a soda jerk, newspaper reporter, tech writer, foundry laborer, and project physicist, which taught me that lab work wasn’t for me but teaching and writing were.

After a year of teaching at Western Michigan University, I took a position at Northeastern in Boston. Originally hired to teach linguistics, a subject which was turning my blood into ink, I introduced a course in Science Fiction which I had read by the pound as a kid. With the success of that, I then introduced two other popular- culture courses—Horror Fiction and Modern Bestsellers as well as Fiction Writing.

Some years ago, I took up scuba diving and joined an Earthwatch team looking for Phoenician and Roman shipwrecks off the Spanish island of Mallorca.  We discovered two Roman wrecks as well as modern-day pirates who attacked us underwater with anchors dragged behind fast speedboats. Unbeknownst to us, our little expedition had trespassed into the middle of an antiquities black-market involving dealers who were stealing booty from Mediterranean shipwrecks and selling it to museums around the world.  I vowed that if I got out of that alive, I’d write a book about it.  I did and moved the locale to the majestic island of Santorini, the ancient outpost of the Minoan empire. That book is called Atlantis Fire, which Stephen King called “a fine thriller seasoned with wit and sensibility…it blew me away.”

That was followed by another archaeological thriller, The Stone Circle, which got good reviews. Two years later I wrote Rough Beast, a biomedical thriller which defined my future novels. Because of its reception, the publisher asked that I do more of the same—high concept bio-medical thrillers centered on the family. That led to Elixir, which got optioned for a movie by director Ridley Scott.  Because of that option and the publisher’s perception that the book was going to take off, I was asked to adopt a pen name to fool the bookstore chains which base their prepublication purchases on the sales figures of an author’s previous title. Because my publisher (Tor/Forge, Macmillan) wanted to print up ten times the hardback copies of Rough Beast, they didn’t want bookstores to under order. Thus, Gary Braver was born. Scott, alas, did not make the movie, even after a second option, but Elixir did well.

My latest, Choose Me, co-written with international bestselling author Tess Gerritsen was released in July 1, 2021.

I have known Tess for 25 years, and at a Christmas party a few years ago, she asked if I’d like to write a book with her. The #MeToo movement was in the news and we decided to write a mystery novel which would be centered on an illicit affair which, we later agreed, would be between a male professor and a female student of his. Because there are two sides to an affair, I would write the male point of view chapters and Tess would write the female point of view chapters. We collaborated for the next 18 months, mostly by email. And the result was Choose Me which received rave reviews and which went on to become an international bestseller.