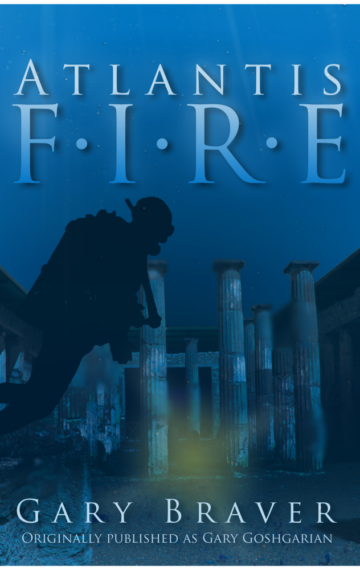 Six American divers—a college professor, soldiers-of-fortune, an unfulfilled woman, a driven Jesuit archaeologist—search the crystalline, menacing waters of the Greek Isles of Santorini for a fabled lost city. They find it. Yet the end of their search is the beginning of an extraordinary adventure, for the treasures of Atlantis are sought by governments and cutthroats alike, threatened by volcanic eruptions and guarded by a monumental icon that has defied the touch of all but one man for a thousand years before Plato’s time.

This superbly crafted novel, set amid the mystery and majesty of the Aegean, combines high tension and suspense with a terrifying realism, climaxing in an unforgettable undersea battle between two armies in wetsuits deep in the exhaust vents of a submerged volcano.

“. . . [A] fast, colorful suspense-adventure. The story races to a literally explosive climax that is better than [Peter] Benchley [Jaws, The Deep] at his best. . . Atlantis Fire blew me away. This is a fine thriller, seasoned with wit and sensibility.” — Stephen King

“A lively and dramatic story of underwater exploration, of the stunning discovery of what may be the lost city of Atlantis, and its golden treasure. . . . full of chilling surprises.” —Publishers Weekly

“Archaeological diving sequences are very well done—the author has actually participated in such expeditions. . . The climax, a free-for-all fight in underwater caves . . . is as exciting as any reader would want.” —Library Journal

“. . . the underwater searches and fights are vivid with authentic detail. It’s the sort of stuff which should tempt the producers of money-making films like “Jaws” and “The Deep” to try again.” —The Boston Herald