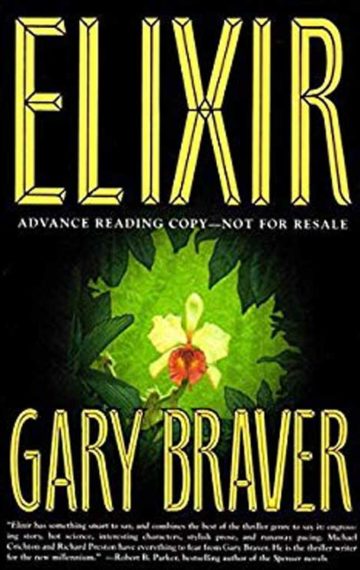 ELIXIR has been translated into four languages.

Named by the Editors of Barnes & Noble as Top 5 Editor’s Pick for Best Medical Thrillers for 2000, and Top 15 Best of 2000 Horror & Suspense. ELIXIR was under film option for two years by director Ridley Scott (“Alien,” “Gladiator,” & “The Martian”). Although Scott did not exercise the option, this story continues to stir interest in Hollywood.

“Dorian Gray enters the world of the biotech thriller in a fast-paced and well plotted debut novel that tells the tale of a geneticist who discovers a miracle drug that reverses the aging process… Braver… explores the moral and ethical dilemmas proposed by anti-aging technologies… with compelling plot twists and down-to-earth writing that bring his characters to life as ordinary yet complex people…an intoxicating read.”- Publishers Weekly

“Goshgarian, the author of other smart cautionary tales, Rough Beast and The Stone Circle, has tapped into an American obsession and come up with a relentless page-turner that manages to deal with technical, scientific and medical material while still being entertaining, witty and very unnerving. Next time you look into the mirror and say ‘Out, out damn spot’ when you see those signs of aging, read this book first.”- MetroWest & Community Newspapers

“Among the best of its genre … an outstanding addition to all fiction collections.”- Library Journal

“Elixir delivers all the suspense and excitement you could ask for, and asks a hard question, too: What would you do if you found that you could live forever?”– William Martin, New York Times best-selling author