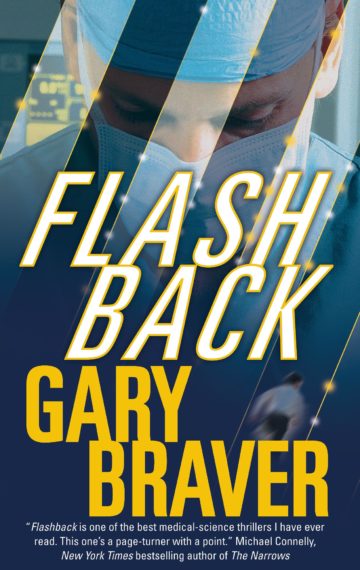 If you could relive your childhood, would you? What if you had no choice?

On a trip back to Cape Cod on the 30TH anniversary of his mother’s drowning, Jack Koryan, a prep school teacher turned restaurant owner, is stung by a school of rare jellyfish whose toxins send him into a coma for several months. When he awakens, he finds that the jellyfish toxin has left him with extraordinary memory. But he is also haunted by dreams and flash-memories–some of pleasant childhood vignettes, others of dark violence that leave him quaking in horror.

Jack wonders if he’s losing his mind, but that fear is dispelled by Rene Ballard, a pharmacologist who is testing those same jellyfish toxins on Alzheimer’s victims with extraordinarily successful results that could lead to a breakthrough cure—though some patients have also committed acts of inexplicable violence.

Together Jack and Rene explore a scientific mystery to help explain what is happening to Jack at the same time uncovering a sinister pattern of lies, deceit and greed that has left behind a trail of bodies. And several elderly patients who are stuck in a past that they cannot emerge from—or don’t want to.

Massachusetts Center for the Book said about Flashback:
“This fast-paced, elaborately-plotted murder mystery, set in Massachusetts, delves compellingly into ethical and moral issues, weaving an elaborate web of intrigue around the processes by which the brain processes memory, and by which business interests intervene in the development of a drug to combat Alzheimers disease. With its timely topic, strong and believable characters, and captivating action, the plot twists and turns to a surprising conclusion, inviting readers to consider along the way the value not only of remembering but also of forgetting.”

“An exceptional medical thriller. . . that is touching and believable. With this latest book, Braver. . . marks himself as a worthy successor to Robin Cook, Michael Crichton and Tess Gerritsen.”- Publishers Weekly

“The key to this strong medical thriller is the high degree of believability that something sinister is happening to Alzheimer’s victims beyond just the devastation of the disease. . . . Gary Braver provides a fantastic tale worthy of award nominations as one of the sub-genre’s best tales, if not the top medical thriller, so far this year.”- Midwest Book Reviews

“At once a fast-paced medical thriller and a thoughtful rumination on the nature of memory (look out, Michael Crichton).”- Booklist

“Braver creates a nightmare world, then ratchets up the terror with vividly rendered flashbacks that are not for the faint of stomach. This is a thoughtful book with an intriguing premise and a sprawling plot, pulled together with a twist at the end.”- The Boston Globe

“Braver is a standout medical suspense writer. He takes controversial, of-the-minute topics, researches the heck out of them, and then asks the billion-dollar question: ‘What if?’ The answer is a bold, edge-of-your-seat page-turner with the underlying message, “Be careful what you wish for.” Braver more than liberally sprinkles his timely tales with thorough research and a plausibility that makes one pause. In FLASHBACK, he delivers once again what we have come to rely on from him: hallmark intelligence, eerie believability, and fear.”– bookreporter.com

“As with each of his books, Braver proves himself to be not only a skilled novelist, but an exceptional writer, investing his prose with lovely cadence and rich evocation, and endowing his characters with inner lives full of turmoil, need, hope, regret, and humor. “Thriller” is almost the wrong word to use for his books; “drama” might be a better choice. In any event, Braver proves that the novel is not dead even as he demonstrates that realistic speculative fiction is neither kid’s stuff nor a trivial time waster, but essential to confronting and controlling the technical marvels of our own modern world.”- edgeboston.com

“Flashback is one of the best medical science thrillers I have ever read. With an amazing attention to detail Gary Braver has woven together a story that is as timely as it is gripping and as telling as it is touching. This one’s a page turner with a point. “- Michael Connelly, New York Times best-selling author

“FLASHBACK grabs you by the throat, and the heart, from the first page to the last. The superb writing carries you away into a world of inexplicable acts perpetrated by our common man. Chilling!”– Ridley Pearson, New York Times best-selling author

“Flashback’s compelling, fact-based medical thriller resonates with the clear pure notes of reality and positively blurs the line between reality and imagination. Braver has created a fictional world you are dying to believe in.”- Lewis Perdue, New York Times best-selling author

“Gary Braver does it again. Another taut, suspenseful medical thriller from the new master of the genre. Strong characters, a powerful plot, and when those jellyfish start stinging you on the first page, you’ll want to swim for safety, but you won’t want to put the book down until you’re done.”– William Martin, New York Times best-selling author