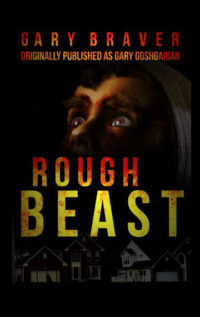 “And what rough beast, its hour come round at last,
Slouches toward Bethlehem to be born?”

It is from these famous lines of William Butler Yeats’ “The Second Coming” that Gary Braver derives his title for this provocative novel.

Rough Beast, set in a small town in Massachusetts, is a thriller in the tradition of Stephen King and Dean Koontz, combined with the scientific underpinnings of Michael Crichton. The elements of horror and suspense and intrigue reinforce one another in a many layered tale that ultimately brings the boundaries of nature into question. Gary Braver has crafted a novel that plumbs the depths of genetic engineering, a powerful force that can be used for good or evil. Rough Beast explores the consequences of a military experiment gone wrong and its effects on as normal, unsuspecting American family–especially on its twelve-year-old son, Matty.

“Watch out, Stephen King! Gary Goshgarian [Gary Braver] has taken your incredibly successful formula and made it work as skillfully for him as it does for you. Goshgarian is an excellent writer of suspense. . . Rough Beast is explosive, gripping and truly scary!” –The Roanoke Times

“Various mayhem, strange animal behaviors, a shadowy hit-man, and a secret Vietnam-era project are thrown into the cauldron. It’s all fun, and Goshgarian can propel the plot and reader forward.” –The Washington Post